Bespoke Cigars paving its way in the US market 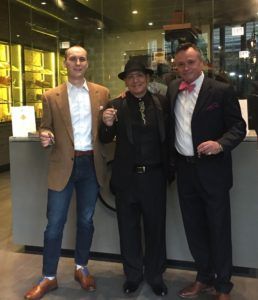 Bespoke Cigars has been on the USA market on and off since 2002, but since the founding of it’s dedicated USA distribution company, The Bespoke Company, headed by Vlada Stojanov in 2017 its presence has been steadily growing. Bespoke Cigars is available at a number of premier shops around the country including The Clayton, The Small Batch Company, Cigar City, Chivas and Dallas Blue Smoke to name a few. Currently our focus is on being in premier shops and lounges.
Bespoke Cigars has also been acknowledged by the US based cigar blogger “the Katman”, who has named two vitolas of Bespoke Cigar’s production as his Cigar of the Year and rated another 5 with high points over 95.

“It has not been easy for us in the US market as we are a small boutique brand. Many past attempts to establish ourselves into this huge market have come to a hault at some point. Finally we are enjoying some success and hopefully it is just the start of something very special . I am very grateful to Vlada and the close partnerships he has established with the team at The Clayton Chicago, who are assisting with distribution, as well as Tony Serino of Nino Vasquez, our importers and facilitation agents. We would not have made it without them.” says Jeremy Casdagli

“A chance meeting and a tasting that I almost missed lead to me sampling three different Bespoke cigars – the Cotton Tail, Gran Mareva and Grand Cafe Lancero. The Grand Café by the way holds a special place in my heart and is one of my 3 desert island cigars. The result was whilst I had access to almost every Cuban imaginable I found myself smoking nothing but various Bespoke cigars for 6 months.” says Vlada Stojanov, the Product Ambassador in the USA. And adds: “When I moved to the US, wanting to help the brand grow and work closely with them came naturally. I could stand behind the quality, the consistency and the overall luxury experience delivered by each puff of Bespoke Cigars.”

You can find us at the Las Vegas IPCPR Booth # 727